Daughters of the American Revolution

I finally did it. I submitted my application to the Daughters of the American Revolution. I have been meaning to do this for years. Mainly I wanted to make it easier for my granddaughters to apply in the future if they should become interested. My patriot is Abraham DeHart on my father's side. I am fairly certain I can follow the line back on my mother's side as well. I would be willing to give it a try if a maternal cousin is interested.

The lineage is as follows:

Abrabam DeHart-patriot who fought for our independence in the Revolutionary War.

George DeHart-grandson of Abraham. I have visited the grave of George in DalHart, Texas.           He and his brothers fought in the Civil War on the side of the Confederacy

Emma Susan DeHart Borden -great granddaughter of Abraham and my great grandmother whom I knew well as a child.

Posted by Tolsdorf Test at 12:23 PM No comments:

Many years ago (many=40) when I was in my mid-30's, life was busy, busy, busy. I was a full time elementary teacher with two elementary age children. My husband worked extended hours which left me dealing with daily life on my own at times.

Now here it is so much later in life. So many changes. So much living. And now it seems so long ago.

I found a cartoon in the paper one day that seemed to summarize my young mother and wife existance. This was so me in those days. 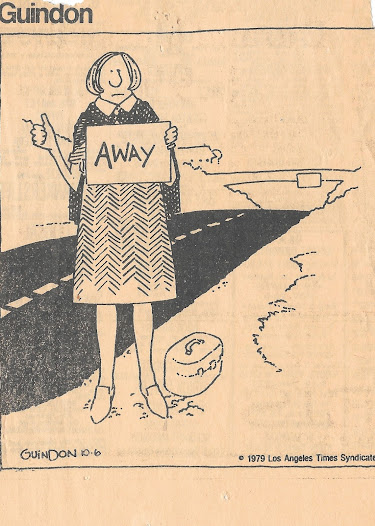 Suddenly, life rushes by and all one has are those memories.  And how grateful I am for them all.
Posted by Tolsdorf Test at 12:46 PM No comments:

Only in a Small Town

Recently, I was on a walk with a friend and told her a story about a near fatal accident some years ago.  Little did I know I would come across a written version of that saga only a few days later. I didn't remember that I had even written about it.  The missing piece of this story is the year. I detailed the date but not the year. It was somewhere between 2006 and 2008.  The original title was just what I have written here; Only in a Small Town. Then I renamed it A Tale of Two Fridays. Either title is appropiate. Take your choice.
.
On December 16, my husband, Tom, his mother, and I headed for St. Louis to spend the week-end with the kids and granddaughters three.  About 10 miles or so into the trip, Doris, Tom's mom, remembered that she had forgotten to stop her mail.  Tom said we could just call the post office on the cell phone, but Doris did not know the number.  However, she did know the number of the congregate meal site where she drank coffee every mornng. ate senior lunches, and quilted in the afternoons on Monday and Friday.  Tom called the number and Carol, the cook, answered. Carol was one of the 34 graduates in our Scranton High School Class of '63. (that is 1963 not 1863 as some of you might think). So, we knew her well. Tom asked her to look up the number of the post office. She was glad to do it.  She also volunteered to do it for us if we wished. No, indeed we could do it.  Tom then called the post office.  Of course, they were happay to put a hold on Doris' mail, but Friday's mail had already gone out.  Tom's reply to the next question was, "If it isn't too much trouble."
The question posed after explaining Friday mail had already been dispatched was, "Would you like us to go pick it up and bring it back?" Aaaah, life in a small town.
.
Little did I know what the next Friday would bring. Hence, the inspiration for the second title to this piece.
On Friday, December 23rd, we had the opportunity to the "call any number in Scranton for help phone technique" but for a much different reason.  This time we were trying too get in contact with Dad's insurance agent. Tom called the  insurance office first but it was closed for Christmas.  Then he called the only other number he knew, the bank's. He called the bank number so someone could look up the insurance agent's home number.  He was not home, but his wife gave us his cell phone number.  Our agent was passing by Glidden ( 9 miles west of Scranton) when Tom reached him.  He went straight to his closed office to look up information for us.
This is why we needed the information.
About 25 miles west of the Quad Cities on our way to Springfield on the 23rd, Tom moved into the passing lane to go around a semi. About half-way around, we suddenly couldn't see anything.  Tom was doing about 72 miles per hour.  Evidently, a wind gush or vaccum pocket caused our van's hood to pop open and smash into the windshield. Now remember we were doing 70+ miles per hour and could not see because the hood was blocking the view. The windshield stayed in place but was shattered.  The snow, ice and slush complicated the situation. And we were driving blind next to a semi on our right.  Tom managed to slow the van to a speed in which he could pull over to the middle median and get stopped.  All, I remind you, without being able to see.  We were so lucky on so many counts.  The main one is probably that I wasn't driving.  I think I would have just closed my eyes and screamed before dying.  It still gives me the chills to think about how lucky we were.  Meanwhile, our insurance agent spent time on the phone looking for a place where we could help. It was the Friday before Christmas and everything was closing. His was not an easy task. As we slowly continued in the dismal weather almost feeling our way along, our agent found a place in Davenport where we could get the exact windshield and they were ready for us when we arrived.  One and one half hours later, we were back on the road to Springfield and the repair shop closed as we drove out of the lot.  Just as Dickens ends his Tale with memorable wordage, I will try to do the same with mine.
I will enjoy today.  Tomorrow may not come my way.
Posted by Tolsdorf Test at 10:34 AM No comments:

If I made a New Year's Resolution for 2021, it would be to get all my photos in some sort of order. I am starting realize my time is running out.

One of the photos I recently came across baffled me. Certainly those are my parents, Mary and Vern, but where are they? I finally figured it out but can you? 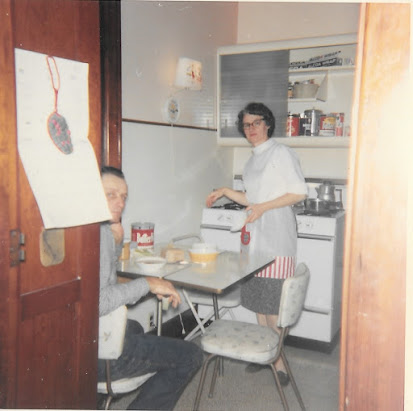 Posted by Tolsdorf Test at 12:28 PM No comments: 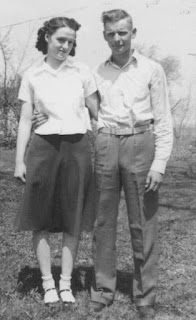 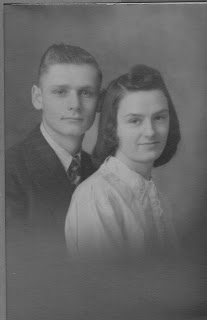 On December 16, 1941, my parents, Mary Grisso and Vern Wright, were married in the parsonage of the Methodist Church in Scranton, Iowa. Their only witness was my grandmother, Nina Smith Grisso.

This would be their 79th wedding anniversary.

Posted by Tolsdorf Test at 10:53 AM No comments:

How did Grandpa's truck get to California? 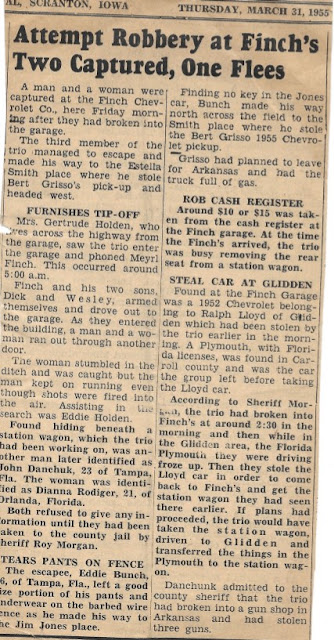 While sorting ( because I am always sorting) I came across some newspaper articles about the time my grandpa Bert Grisso had his truck stolen out of the yard south of Scranton, Iowa.  I remember the story well because his truck ended up in California. I was 10 at the time and thought this was a really, really big deal. And I guess it was.
Posted by Tolsdorf Test at 1:10 PM No comments: 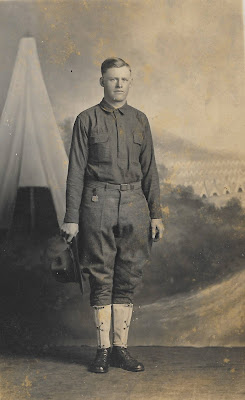 I thought it would be interesting to show some of the military photos from my family.  This my maternal grandfather, Bert R. Grisso, in his World War I uniform. I really don't know much about it. Something to research. His sister, Edith, also served.
I thought this Family Veteran's post was such a great idea. Of course, this was several months ago. Lots of time. Oops. Time is up and I am missing many photos. 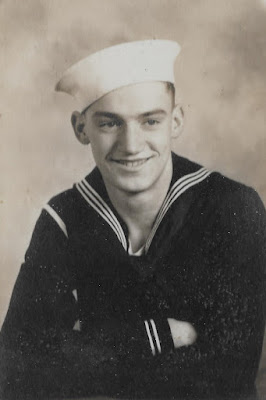 This is my Uncle Bill, son of Bert Grisso pictured above in his WWI uniform. Bill served in WWII and was aboard his ship when the flag was raised on Mt.Suribachi on Iwo Jima. The cheers were heard all along the coast where his ship was located.
Bert Grisso had four sons who served in the Military. They were all Navy men. In addition to Bill, there was John Grisso, Marvin Grisso,
and Donald Grisso. Marvin made the Navy his career and was buried at sea at age 49.
Bert's brother-in-law, Dale Smith, was in WWII and remained a career Navy man.
When I think of WWII, I am reminded that my dad's first cousin, Russell Wright, did not come home from that conflict.
Maybe another time I can add more details about some of our ancesters who participated in the American Revolution, Civil War, and the conflict in Viet Nam.
As proud as I am of all my family members who served in the military, I have to show the pictures of a couple of my favorites. 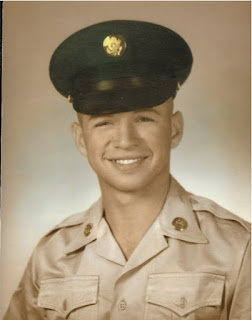 My husband,Tom, served in the Iowa National Guard for 12 years. He was a helicopter pilot. 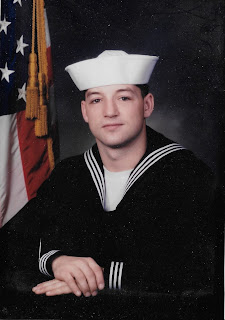 Our son, Scott, is our most recent family Veteran. He served in the Navy for 9 years. He was a submariner assigned to the USS Albuquerque.
Thank you to these Veterans for their service and all the others to whom we owe our freedoms.
Posted by Tolsdorf Test at 8:03 AM No comments:

At the turn of the century, Ginevra and John Mac Vorhies were about to see the first of their three children marry.  Estella, my ...